We visited the Prairie Archives of the Milwaukee Art Museum to do some research and to meet with museum staff about a possible collaboration in anticipation of next year’s exhibition on the works of George Mann Niedecken.

Liz Flaig, the curatorial administrator of the archives, and the other staff were as cordially enthusiastic as we could wish. We were particularly interested, of course, in carpet and textile designs, so we focused on those. We looked at many original drawings and documentation for Niedecken interiors in the midwest, including several of those done in collaboration with Frank Lloyd Wright.

Our dear friend and colleague Michael FitzSimmons came up from Chicago to join the party. 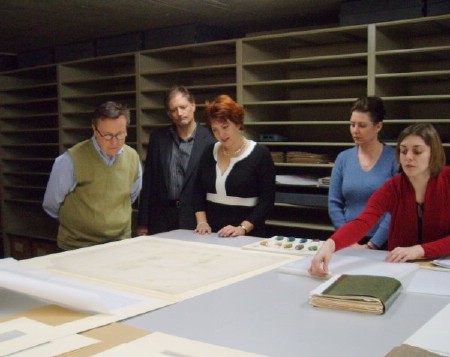 Archivist Tim Ladwig and the others were very patient with us while we looked for information that was arcane even by museum standards. During one of the more suspenseful episodes, Tim cut a watercolor rendering of a Robie House carpet away from its backing to view the pencilled notes we were sure were on the reverse. It was anticlimactic; what we were looking for wasn’t there. But that’s the nature of research. 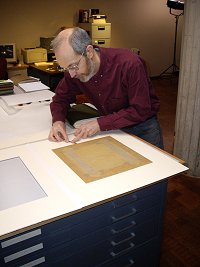 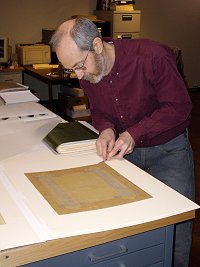 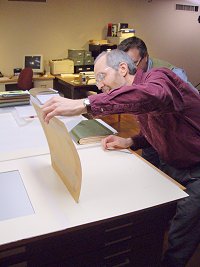 One of the highlights, for me, was to physically get my hands on a carpet designed by Niedecken for the Adam Mayer house, which was produced by the European firm of I. Ginzkey in the early 20th century. (I’m researching the extant carpets produced by Ginzkey, and there aren’t many.) Looking at the black and white photos of the Mayer house interiors, and knowing the timeframe (it was completed in 1907) you probably wouldn’t predict the color palette of the carpet; it prefigures midcentury trends by about forty years. But then, Niedecken was a genius. And a heckuva nice guy, too, by all accounts.

No story of a trip to the museum would be complete without a mention of the striking architecture of Santiago Calatrava. So I mentioned it.

Now, on to the Pabst Mansion, and our meeting with architectural historian (and guest curator for the MAM’s Niedecken exhibition) John Eastberg.