In case anyone is wondering whether we really do live in a global village, and if the world is flat, I offer the following story.

Once upon a time, there was an architect in New York who saw one of our luscious mohair samples, and decided that it would be perfect for one of their projects. The client required a distinctive hand-knotted carpet for a rather stately room with some challenging architectural constraints.

After intensive consultation and discussion, the architect contracted with us to produce the carpet. Although we have the capacity to do design work in-house, we asked our Irish partner, Donegal Carpets, to graph the design for weaving. The client had selected one of Donegal’s oldest documented designs, generally referred to as the Fintona, and he liked the idea that the artwork would be produced by the venerable company. While Colm drafted and graphed the design in Ireland, we worked on the wool and color specifications in our Minnesota studio. 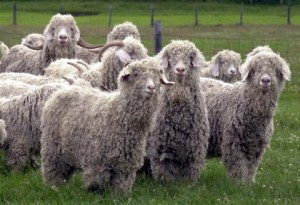 After the design work was done and the colors approved, we were ready to purchase the wool and begin the dyeing and weaving. Mohair is a specialty fiber, the fleece of the Angora goat, and most commercially available mohair comes from South Africa, with minor production in Australia and Texas. However, during the interim when the design work and coloring was being done, an Italian textile company had bought up both the currently available mohair clip and mohair futures, which caused the market price of mohair to double.

Despite the difficulties, the intrepid architect and client decided the that soft, lustrous, incredibly gorgeous mohair was what the project required, and nothing else would satisfy. How to obtain a sufficient quantity of mohair, when someone else had bought it all, is a story all its own. Suffice it to say that we were able to obtain the requisite quantity of mohair, at a predictably exorbitant price.

So, we have a company in New York commissioning a firm in Minnesota to produce a carpet in India from design work created in Ireland, using a specialty fiber sourced from South Africa, whose world market price increased dramatically due to the actions of one company in Italy. It’s not quite like a butterfly’s sneeze producing hurricanes a month later, but you get the idea.

Undaunted by the prospect of bad carpet karma based on all the preceding events, we went on to the weaving stage…. but not without some trepidation. The radial curve needed to shape the carpet requires a degree of precision that’s technically difficult for the hand-knotting process to achieve. However, we thought that between the architect’s detailed calculations, the meticulous design work, and daily oversight of the actual weaving, we were up to the challenge.

Below is a picture of the carpet on loom: 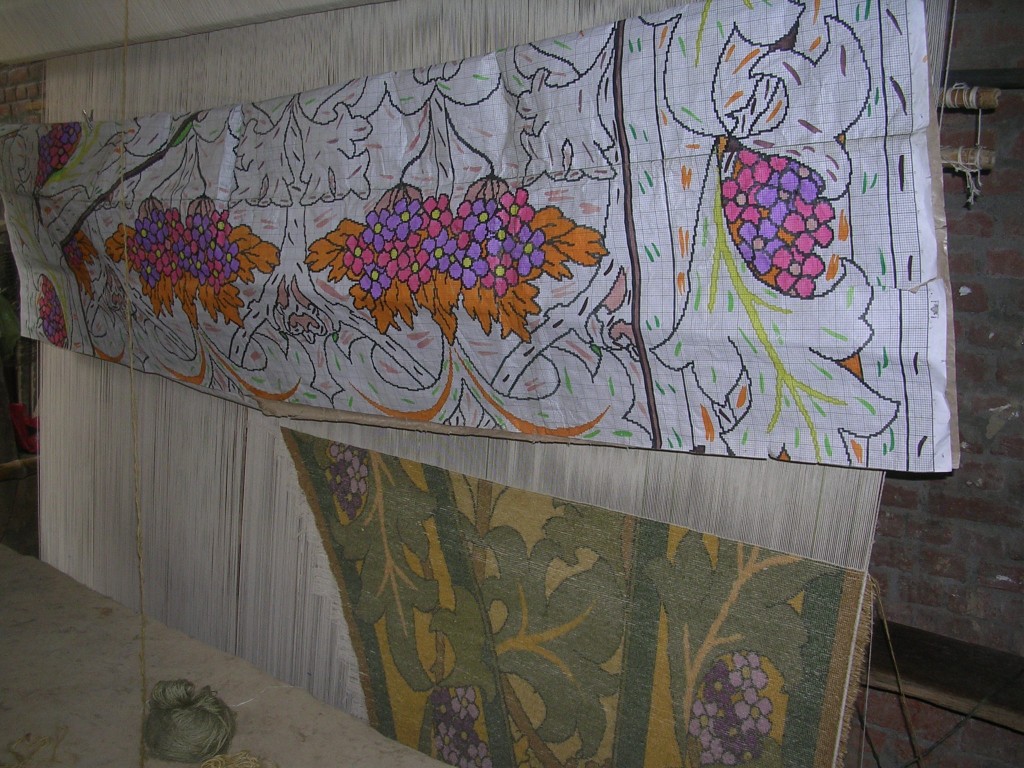 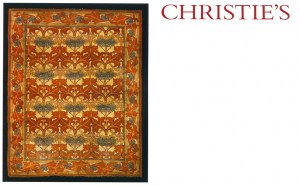 A carpet to this design was exhibited by Liberty & Co. at their “Irish Carpet Exhibition”, held at the Grafton Galleries, London in March 1903 (see photograph above, reproduced from The Studio 1903, Vol. XXVIII, p. 286.) Fifteen Donegal carpets were shown at the Grafton Galleries; the short contemporary report in The Studio comments that ‘these Irish carpets possess technical qualities identical with those of the old-fashioned Turkish and Persian rugs and carpets. Like their eastern prototypes, they are hand-woven and hand-tufted, and they display an individuality which no power loom could produce.’ In his 1991 book Haslam describes the present design as the “Fintona”. Haslam later suggested that, based on the descriptions from the unillustrated Liberty booklet, Irish Hand-Made Carpets,published shortly after the Grafton Gallery exhibition, this name actually referred to another design. (See footnote to Lot 153, Arts and Crafts and Architectural Designs, Christie’s New York, December 12, 1992.) The attribution of the design to the Silver Studio is well supported on stylistic grounds, and bears comparison to known designs from the Silver Studio, several of which have been attributed to Archibald Knox. cf. A London Design Studio 1880 – 1963.The Silver Studio Collection, 1980, pp. 103/4, no. 199

Here’s the finished carpet after washing: 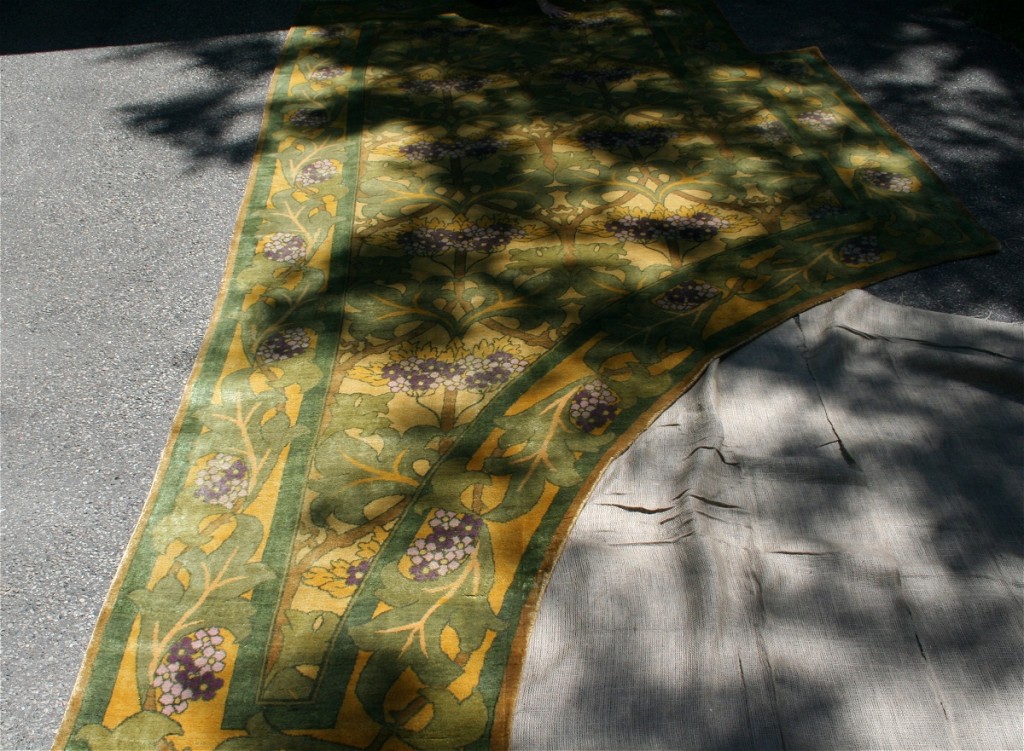