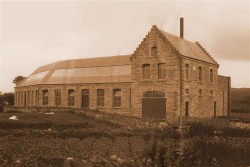 The Story of Donegal Carpets

The company was founded in 1898 when Scottish textile manufacturer Alexander Morton established a hand-woven rug manufactory on the western coast of Ireland. Drawing on the talents inherent in a people who had worked with wool and weaving for generations, Morton’s rugs soon became known as “Donegals,” following the oriental tradition of naming carpets after the village in which they were made.

From the outset, the fame of Donegal Carpets spread throughout the world as the name became synonymous with fine craftsmanship in carpet manufacture. Donegal Carpets immediately created a niche in the market with our now-famous Arts & Crafts designs, commissioned from the drawing boards of contemporary notables such as C.F.A. Voysey, Walter Crane, Mackay Baillie Scott, and Jessie Newbery.

Donegal carpets were available through venues such as Liberty of London and Goodyers of New Bond Street in the UK, and Gustav Stickley’s Craftsman showrooms in New York and Boston in the U.S. These new Donegals delighted the Gilded Age, and met with great success among those who were building the grand houses that have since become East Coast landmarks. In the past few years, some of these original Donegals have sold at auction for $80,000-125,000. 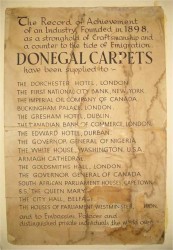 Three of the four Donegal Carpets manufactories were closed during the Depression, and production was centered in the original factory in the village of Killybegs, where the company continued to create bespoke carpets for stately homes and government buildings. The Morton family sold the company to an Irish consortium, Donegal Carpets Ltd., in 1954. By 1987, orders had dwindled as changing fashions and economies had taken their toll, and the factory closed its doors.

In 1997, citizens of the village of Killybegs successfully petitioned the Republic of Ireland to save the historic factory. Beginning in 1999 with a new commission from the Irish government, Donegal Carpets reopened and the original looms came back to life, creating bespoke carpets for Áras an Uachtaráin, Dublin Castle, the University of Notre Dame, and others.

Today, the Donegal Carpets factory at Killybegs is the only place in the British Isles where hand-knotted carpets are still made. Part of the original factory has been converted to a Visitor’s Centre where demonstrations of hand-knotting can be seen.

Below, a one-minute clip from a vintage company documentary, which shows the hand-knotting process (video only, no audio):

This is the interior of the factory, and a picture of Danielle and me seated at one of the original pitch-pine looms. 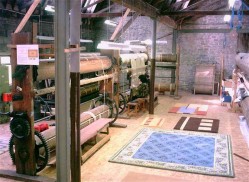 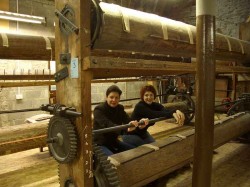 So, with one purchase of our Voysey Collection carpets, you aid the survival of a heritage company, support a women-owned business, provide employment in developing areas of the world, and help end child labor. It doesn’t get any easier than that!